You use the Office 365 admin centre to enable and configure Microsoft Teams for your organisation.

A team is designed to bring together a group of people who work closely to get things done. Teams can be dynamic for project-based work (for example, launching a product or creating a digital war room). Or, teams can be ongoing, to reflect the internal structure of your organization. Channels are subcategories of teams. You might create a channel for an activity or for a department. Conversations, files, and notes are specific to each channel, but all members of the team can see them.

Users can create teams by choosing Teams on the left side in the Microsoft Teams client (desktop or web app), and then choosing Create team at the bottom of the client, below the team list. 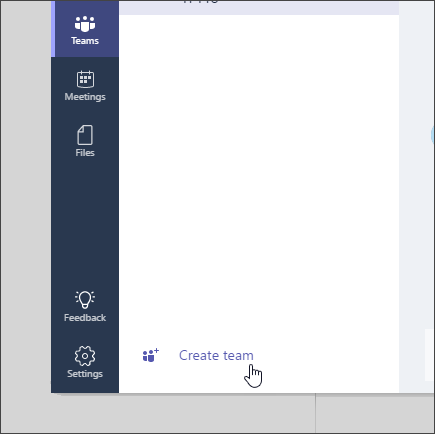 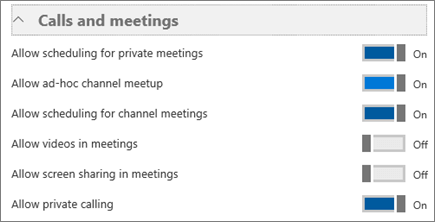 As a tenant admin, you can turn on or turn off media content such as animated images, memes, and stickers in the Messaging section of the Microsoft Teams settings page. 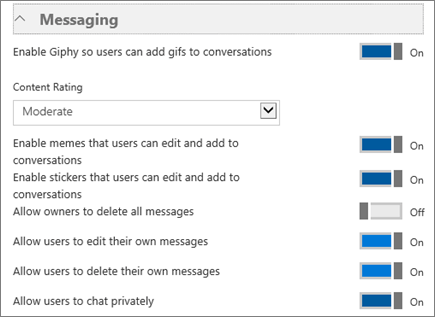 When animated images are turned on, you can apply a content rating to restrict the type of animated images that can be displayed in conversations. You can set the Content Rating to be one of the following:

To turn on or turn off custom memes, click or tap the toggle switch next to Add customisation images from the Internet, and then choose Save.

To turn on or turn off stickers, click or tap the toggle switch next to Add editable images to the conversations, and then choose Save.

Tabs let you customise a channel to include content and capabilities your team needs every day. They provide quick access to frequently used documents and cloud services. In the preview release, there are several built-in tabs such as Files and Notes. In the Microsoft Teams client, at the top of the channel, users can add tabs for Word documents, PowerPoint presentations, Excel spreadsheets, OneNote notebooks, Power BI reports, and plans from Planner. 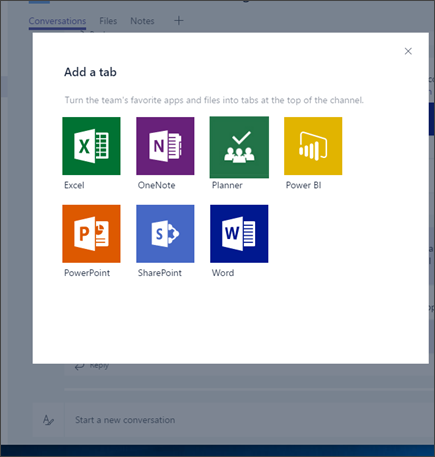 Over time, more tabs will be added, both from Microsoft and from partners. Team owners can also side-load tabs so they appear in the Tab gallery for that team. And developers who create line-of-business (LOB) applications can also use the side-load capability to test their applications in test teams that they create.

To turn on or turn off support for tabs from partners and support for side-loading of applications, in the Tabs section of the Microsoft Teams settings page, click or tap the toggle switch next to Enable extension tabs in Microsoft Teams, and then choose Save. Changing this setting does not turn off the built-in support for default tabs, including Microsoft Office files, OneNote, Microsoft Planner, and SharePoint document libraries.

For more information about building custom tabs or integrating an existing tool as a tab, see Getting started with tabs for Microsoft Teams (preview). Developers can also learn more from Office Dev Center – Microsoft Teams.

Microsoft Teams users can complete tasks such as querying information and performing commands by using bots. You can also integrate your existing LOB applications with Microsoft Teams by using a bot.

To turn on or turn off any built-in bots, in the Bots section of the Microsoft Teams settings page, click or tap to switch the toggle next to Enable bots in Microsoft Teams to help users complete more tasks easily, and then choose Save. Changing this setting does not turn off the availability of T-Bot, the built-in help bot.

To prevent or allow side-loading of proprietary bots, click or tap to switch the toggle next to Enable side loading of external Bots, and then choose Save.

NOTE: For developers to be able to test bots in Microsoft Teams, you must turn on bots.

Office 365 Connectors allow your Microsoft Teams users to receive updates from popular services such as Twitter, Trello, Wunderlist, GitHub, and VSTS, within the chat stream in their team.

Connectors also provide a way for developers to integrate with Microsoft Teams by building custom connectors to generate rich cards within channels. See Getting started with Office 365 Connectors for Microsoft Teams (preview) and Connect apps to your groups for more information. Developers can also learn more from Office Dev Center – Microsoft Teams.

The installers for the Microsoft Teams Windows and Mac desktop clients can be downloaded from https://teams.microsoft.com/downloads. End users on desktops can install the application if they have the appropriate permissions. Admins can also download the installer and distribute it through client distribution tools.

Turn on or turn off Microsoft Teams licenses

What others have had to say